Music Photography with a life of its own… 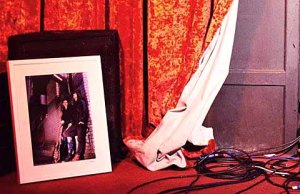 This lovingly placed picture that has been out of sight and out of  my periphery for more than a year made an appearance in the most unusual way. (thanks Caffy for furnishing me with this photo)

One of my great supporters in the early days,

the gang and crew of lovely people that make up a niche and issue representations of an alternative but yet prominent ‘stage style’ The Zine : put on and participated in a legendary evening ArtBeatPromo Event in grungy SE London and the legendary Amersham Arms.

This chain of events grabbed my attention (did I mention I wasn’t even there, caught up with work in a completely different location!) with great surprise and stirred up my sentiment; looking upon the development of my start up business and efforts in establishing myself in the world of photography… there it was, a stark reminder  that things, sometimes just take on their own course and that indeed pictures have the right and life of their own.

The Photo #location portraiture session, came to be and born out of sentiment and things passing, when DEUX FURIEUSE played central London (the year before last!) nearby one of my favourite legendary ‘london’ places:

TIN PAN ALLEY under threat to be demolished to make way for the new developments, I do find myself frowning upon, every so often.

At the back of this well trotten path , with a history of it’s own and many bands we know have started here to shape their impact and careers. It seemed all to obvious to get snap happy and create the Picture that had adventures of its own and made it’s own way on stage – many moons later.

The Photograph was gracing the walls of an Expo early last year at Numb3r , was left behind (by myself) and almost forgotten. It had it’s moment so I thought.

How it came to be that Debbie Smith grabbed the Frame, this month…

… and attacked her guitar, to add some layer of noise to the noise fest that it already was,

echoing in the stratosphere & resonating long after the sounds had ceased- I will never know.

But social media did its part and it wasn’t before long that I became aware.

But it happened: with a ripple effect of sentiment beyond the surface of the picture and music itself.

Illustrating the circle that life entails, and that pictures shouldn’t be refined and seen as the quiet witness to things passed and long gone…

… but moving forward to represent what we wish to preserve and need to have seen & heard! 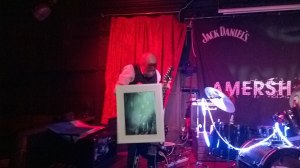 And thank you Walki (aka W. Freedreamer Tinkanesh) to press the button on your phone camera to hold onto that moment, sending me this picture adding to a continuous cycle of not just things that have been,

but also to be part of this chain, that holds us together and creates a chorus audible beyond time and place.